Durgin and Crowell Lumber Company Inc., is an Eastern White Pine sawmill in Springfield, New Hampshire. Since our founding in 1976, we have grown to become one of New England’s largest manufacturers of kiln-dried Eastern White Pine lumber, annually producing up to 30 million board feet. 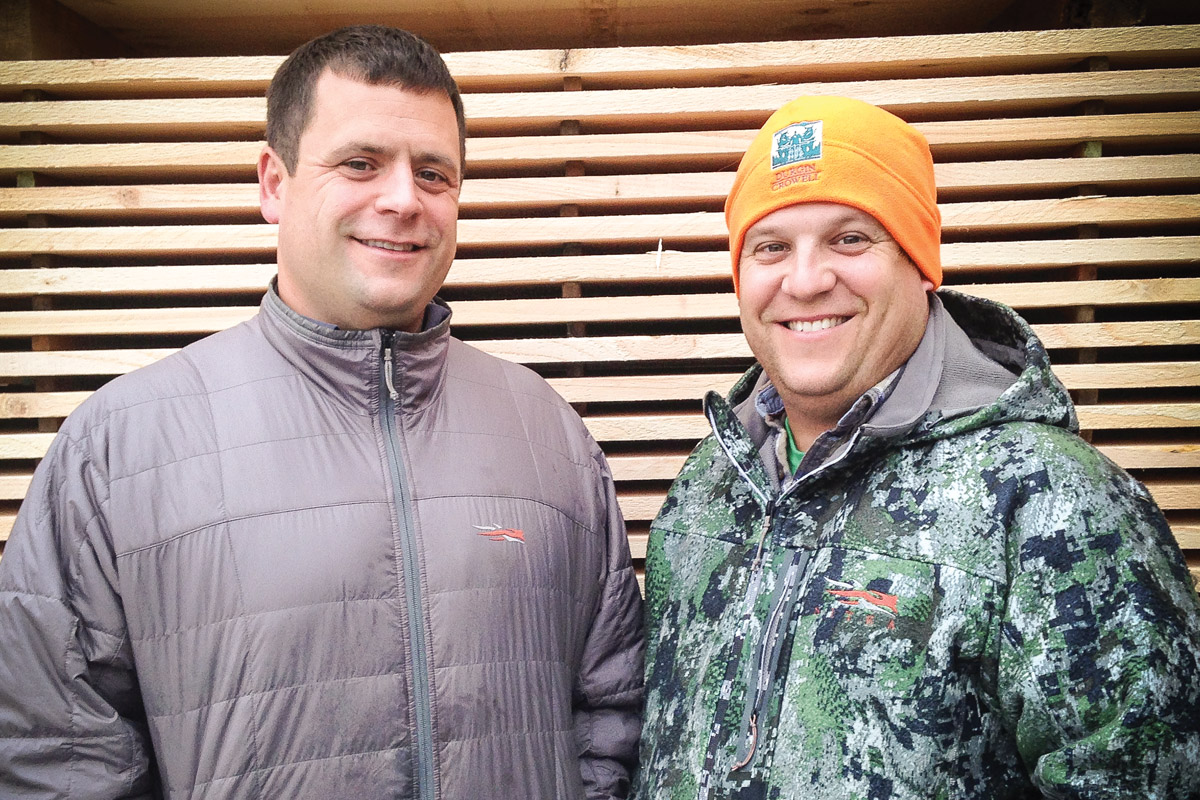 Meet Ben and Peter Crowell. Brothers who grew up in their lumber mill with their father who was extremely passionate about the operation and its success. Currently, the co-owners of Durgin and Crowell, Peter and Ben oversee the business with a handful of employees that have worked here since the mill opened in 1976. 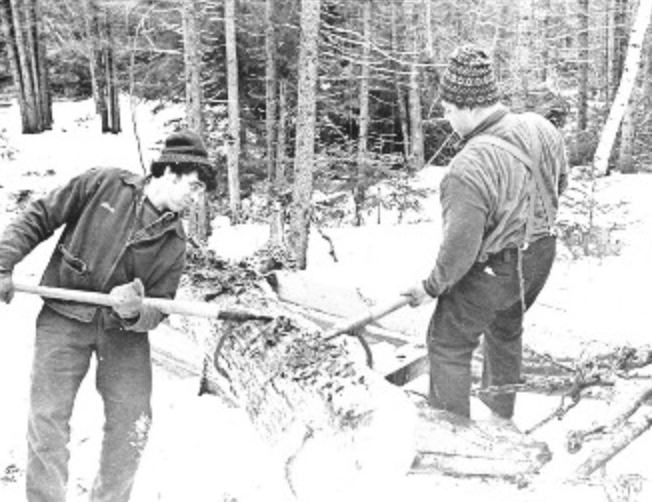 Peter O. Crowell and Arthur Durgin founded Durgin and Crowell in 1976 with just six employees working a small rough green sawmill. Learn more about the history of our mill.

Peter O. Crowell was actively involved in running the daily operations of the mill until he passed away suddenly in the fall of 2009. His sons, Peter B. Crowell (then the General Manager) and Ben Crowell, took over ownership and control of the company and committed to its long-term survival and success. Peter B. and Ben had grown up around the mill and its employees. They were witness (whether old enough to remember or not) to the construction and installation of every new building and piece of equipment. Many of Durgin and Crowell’s key personnel, like B. Manning and Bob Messer, have been with the company since its founding. They have taken part in the company’s success, adversity and all its growing pains, and learned important lessons along the way. 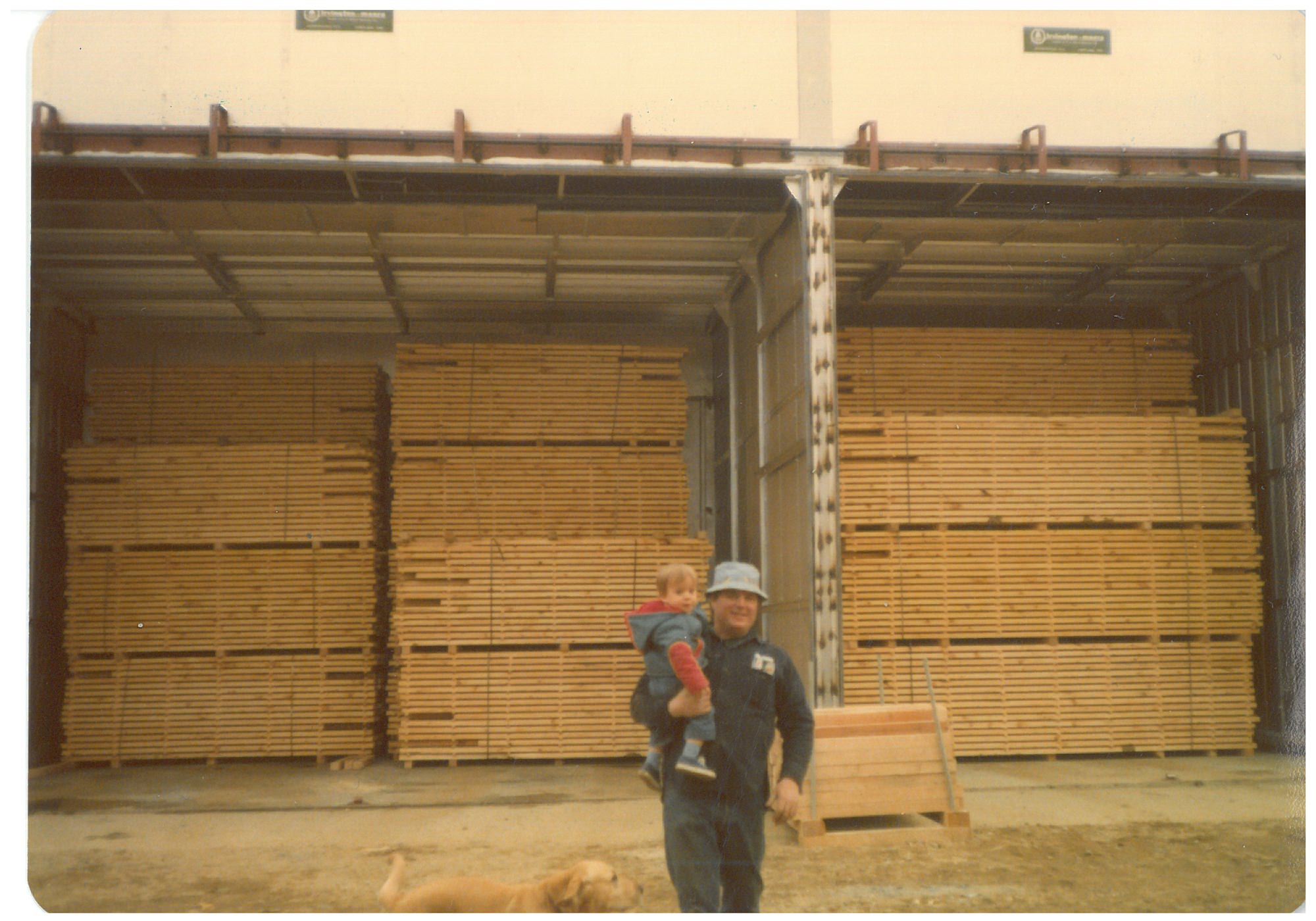 Peter B. Crowell gets a ride in his father’s arms. 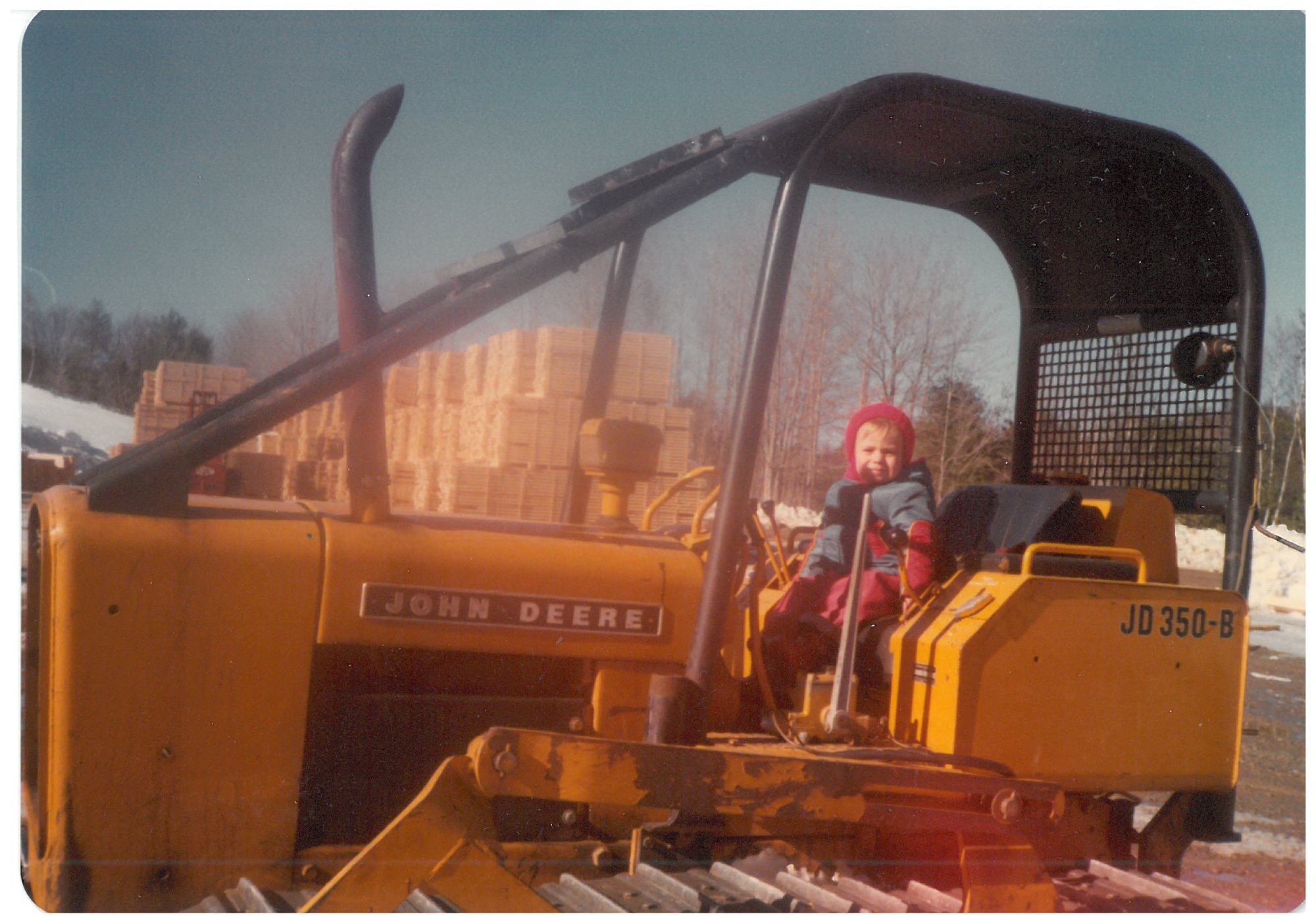 Bulldozers were considered toys to the Crowell brothers.
The Crowell’s commitment, along with the dedication, support and hard work from the company’s employees, ensured a solid transition from one generation of ownership to the next.

At over 30 years of age, the company may not be the oldest lumber mill in the business, but we take great pride in being part of such a time-honored profession. There are many fewer sawmills operating in New Hampshire, and New England in general, than there were in 1976. As many mills have shut down, we have survived and grown, thanks to the combination of old-fashioned hard work and an awareness of the future. 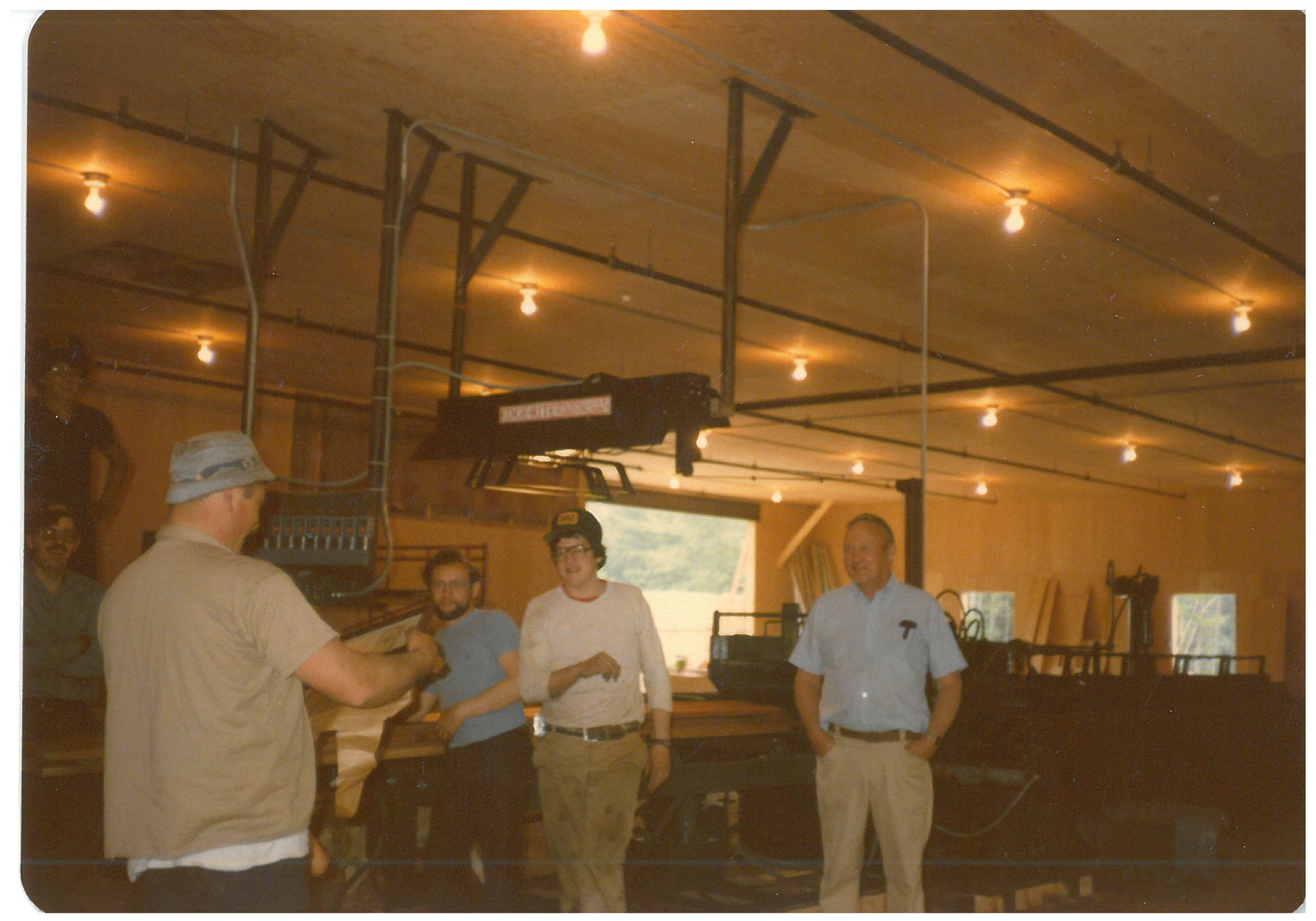 B Manning, presenting his friend and boss, Peter O. Crowell an award around their first successes. B has been at Durgin and Crowell for 38 years. 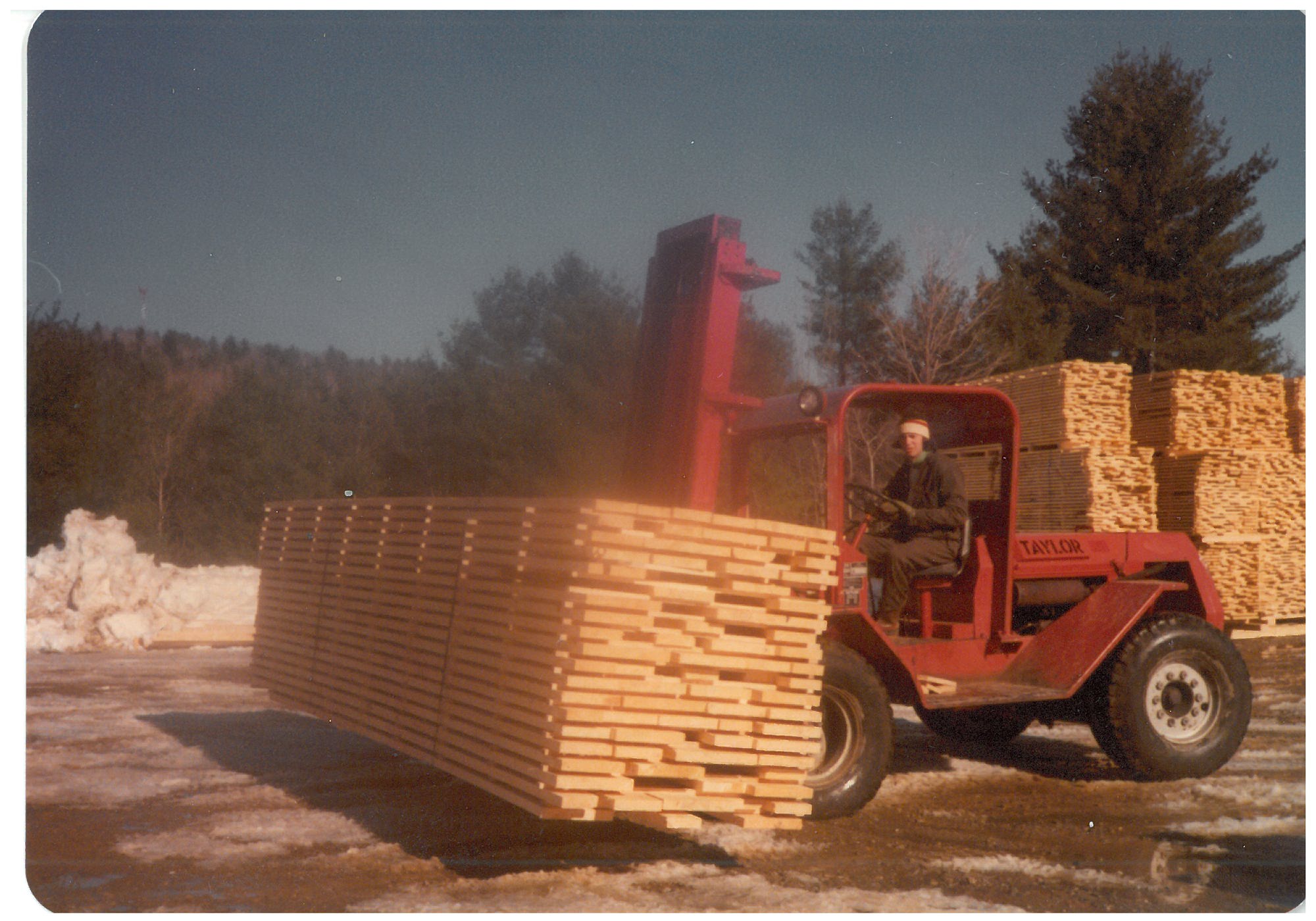 Bob Messer, our current Dry Kiln Supervisor takes a load to the Planer Mill. Bob has been at Durgin and Crowell for 38 years.
Learn more about the history of our mill.