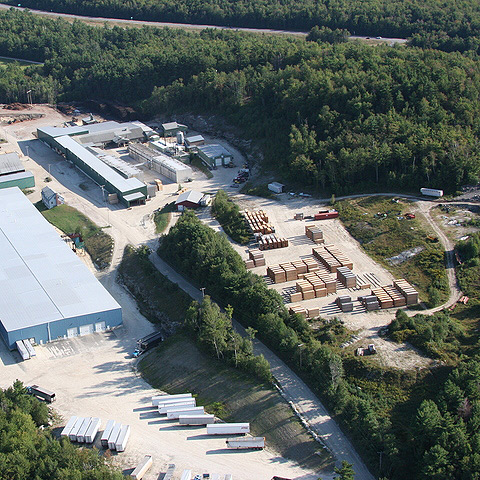 Durgin and Crowell Lumber Company of New London, New Hampshire, is a company that brings to mind what determination and drive can accomplish. In November of 1975 Peter Crowell and Arthur Durgin started to seriously consider setting up a sawmill. By March of 1976 the first board was sawn on their new mill.

Peter and Arthur had met at local fairs, where both were interested in horse pulling, and later in the woods logging. One conversation led to another and pretty soon both wanted to get into the sawmill business. They started looking around, visited some of the local mills, talked with the people operating them, and became convinced that was what they wanted to do.The initial plan called for buying a used hand-set Lane mill and keeping the operation very small and simple. They wanted to set up on a piece of land owned by Peter. However, after spending more time looking at all of the alternatives, they felt that the piece of land they had was not suitable and needed to much work to be done to it to be a good mill site. This didn’t discourage them, nor did it slow them down. Peter went out, looked around, found a piece of land he liked, did some “horse trading,” and bought it.

In the process of looking for some used equipment, they contacted Hawkensen Enterprises, of Plymouth, New Hampshire, a well-known name in sawmill machinery in the northeast. After numerous meetings with Hawkensen personnel, various proposals were “kicked around,” and Peter and Arthur decided to go with a complete new package mill supplied by Hawkensen, consisting of HMC, Precision, and Mellott equipment.

The mill was designed and laid out so that is could be run with a minimum number of people yet still achieve a good rate of production. The equipment consists of an HMC 3-strand live deck to the debarker, an HMC V206H debarker operated by George Werdann, and 30’ deck to the heading. A new HMC MM10 Modular Mill was put in, with a vertical edger and push-button setworks. The vertical edger was used to minimize the labor force required. With this type of edger the edging is done by the sawyer. This eliminates additional man needed for a conventional edger. This part of the operation, which is the key to production , is handled by Arthur Durgin. The rest of the equipment consists of a belt conveyor, lumber transfer, and vibrating conveyor. Don Shaddock and Bill Whitehead handle the job of pulling lumber from the transfer to piling it. A Precision 48” Kwik Chip is used to convert the slabs and edging into chips, which are sold to Connecticut Valley Chipping Company, Inc. 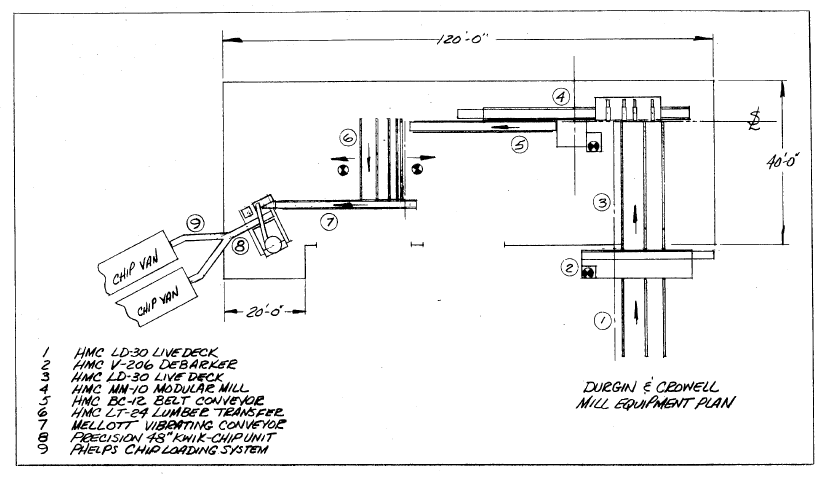 The overall flow and operation is such that it takes a minimum amount of labor, yet there was enough planning and foresight in the layout to leave plenty of room for future expansion, including a conventional, or bull edger and double end trimmer. Even now, after having operated for less than a year, they are thinking about pulling in some additional machinery to complement their production.

Their initial goal was to be able to saw 40 to 45 MBF of pine lumber per week. This was a goal that they realized in a very short period of time. After about the first month of operation, and going through a process of becoming familiar with the equipment and training personnel, their production already exceeded the 40 to 45 MBF they wanted. By the end of the year they had achieved a rate of production of between 60 and 65 MBF per week which , with a five-man crew, is pretty good.

Since the first of the year, they have added another man, Bernard B. Manning, whose function is log scaler, lift operator, and helper on the lumber transfer when needed. With this additional man, the fact that everyone has had more experience with the equipment, their average production so far this year is 85 MBF per week.

The installation of the machinery was handled by Hawkensen Enterprises with Peter and Arthur working right along side with them. This combined effort brought about the short period of time from ground-breaking to actual operation.

Numerous problems were encountered in their first year of operation. However, none of these problems has slowed them down. Initially, the mill was to be powered in the conventional method utilizing electricity from the power company. However, due to the location of the mill, the power company wanted a large amount of money to run the lines to the property. To overcome this, Peter and Arthur bought a second-hand diesel electric unit to make their own electricity. This unit later gave them some problems and has since been replaced with a new Caterpillar 343-240KW diesel electric set. The old forklift they were using initially to load the deck with logs and to remove lumber from the mill broke down and continually gave them trouble. So in August this unit was replaced with a new Michigan loader.

With the rate of production that they were now achieving, maintaining an adequate log inventory became a problem, not because the logs were not available, but because they could not get them trucked. To overcome this problem they bought a new Brockway truck with a Barko loader, which is operated for them by Charles Decataur.

“With the drive that Peter and Arthur have it is certain that Durgin and Crowell Lumber Company is a company that will be around for some time and will continue to grow and prosper.”
photo book:
The very first days
of building a mill